You can see the snow-capped roofs that line the Hogsmeade street and the beautiful stone-work done on the entry-way arch.  The photographer also found a perfect, blue-sky day in Florida to snap the shot.  I can tell you, even though the buildings are covered in “snow,” I can assure you when the Harry Potter park opening date rolls around, the heat will be blaring down on Hogsmeade.

As guests pass through the arch into Hogsmeade at The Wizarding World of Harry Potter park, they will be immediately transported to a world of wonder, excitement and adventure. While exploring the cobbled streets of the highly themed environment, they will encounter iconic locations from the Harry Potter books and films, like the Hogwarts Express, Ollivanders and the majestic Hogwarts castle. Set for a grand opening at Universal Orlando Resort on June 18, The Wizarding World of Harry Potter park will feature multiple themed attractions, shops and a restaurant. 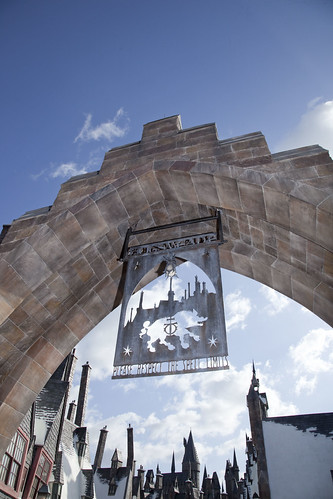